Last Saturday evening my thirteen-year-old son and I went to see Marvel Comics’ latest superhero themed film Guardians of the Galaxy. Me being the the uncool dad who does not know any of the new music, does not really get down with sci-fi, who just wanted to spend some time with his son had many questions. He being the sci-fi superhero movie aficionado reluctantly answered them. It was a cool experience, not because I necessarily enjoyed the film, I just enjoyed the opportunity to hang with my son. The older he gets the more his time will be filled with competing priorities, of which spending time with me may not be at the top of the list.

After dropping him off at home, I jumped on Facebook where I learned that a few hours earlier Michael Brown, an unarmed black male in Ferguson, Missouri, had been shot dead by a police officer. 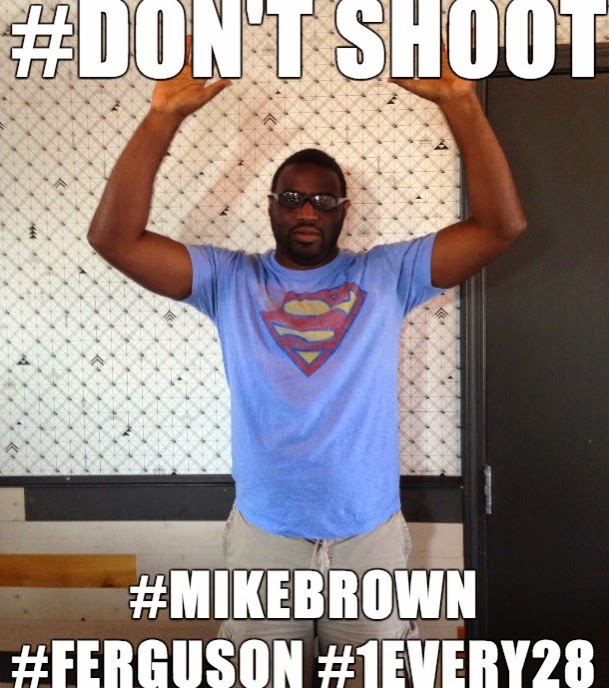 I began to think about my encounters with the police. I thought about the first time I had cuffs put on me (15). I thought about the last time cops pointed guns at me, dragged me out of a rental van, and cuffed me for an hour while they illegally searched the van and then tried to figure out why my eyes were red (29). (Mind you I was tired, I had just dropped off a group of young men who I took to a museum and a play.) I thought about the anxiety that I feel when I see police officers. I thought about the prayers that I pray every time I am pulled over.  I thought about why I have a distrust of police. I know that not all cops are bad or mean me harm. I have family members that are cops.  I have family friends that are cops. However, I am so sick of the murders of black bodies that are attempting to share space in this place we call America.
I know that I’m not supposed to talk about race or I’m not supposed to talk about it as much because MLK had a dream and then Obama fulfilled that dream—we solved the race problem. As such, all the black folks who go to jail or who have not made it to middle class pastures are lazy ass derelicts who need to get their shit together, and if a black body is murdered they probably deserve it because they were drunk, high, too loud, listened to Chief Keef, uneducated, fatherless, in a gang, a thug, a promiscuous twerking thot, sexually confused, or have a mama who did not raise them right because she was worried about finding love or getting her weave done right.

(See: “Dear Millennials: Ain’t nothing post-racial about America” In his weekly read, Michael Arceneaux wonders why 18-24 year olds struggle to see racism—when it’s all around them.)
SCREW THAT!
If I never talk about race again, I still have to live with the realities of race everyday. For you folks who don’t understand what I mean by race, I’m not talking about race in terms of color, I am talking about race as a social construct. I am speaking of the social construct that makes whiteness right and everything else wrong or less than. I am speaking of race as a part of a system of power, as something that is assigned and relegated to particular personalities, something that is politicized, something that speaks of worthiness or unworthiness, and something that assigns bodies to certain spaces.   I am talking about one of the ideas that this country was built on is still maintained by.
Millions of us know, like W.E.B. Du Bois came to find out as a child, that  “[we] are different from the others shut out from their world…shutout by a vast veil.” We hold on to contempt because many of us are constantly aware of and experience the thin veil that allows us to look at the America full of life, liberty, and happiness, but prevents us from fully experiencing those realities. We know of a darker place which includes the forgot about and where we have to prove that we are worthy of what it means to be American. We try to make it in this world like the characters rapped about by Jay Z and Kanye West in their 2010 song “Made it in America,” because like Greg Howard we know  “the United States of America is not for black people.” “We put [this reality] out of our minds,” argues Howard, “and then something happens to remind us.”   And of course that something happened last Saturday in Ferguson, Missouri-excellence was murdered, a dream did not get the opportunity to begin because Mike Brown was murdered.
(See: “America Is Not For Black People” – The United States of America is not for black people. We know this, and then we put it out of our minds, and then something happens to remind us.)
But we know that Mike Brown is not an anomaly. From history we can recall the names of thousands of black bodies murdered for the crime of being black. In post-racial America we, unfortunately, have other names to remind us of what can happen when you are black in a “white man’s world”: Ezell Ford, Rekia Boyd, John Crawford, Philippe Holland, Kiwane Carrington, Gabriella Navarez, Denzel Curnell, Sean Bell, Shereese Francis, Kimani Gray, Sharmel Edwards, Kendrec Lavelle McDade, Ervin Jefferson, Remarley Graham, Shantel Davis, Timothy Russell, Donald Johnson, Marquez Smart, Jersey Green, Robert Dumas Jr., Manuel Loggins Jr., Tyisha Miller, Michael Lembhard, Johnnie Kamachi Warren, Raymond Allen, Nehemiah Dillard, Wendell Allen, Patrick Dorismond, Kanthryn Johnston, Duane Brown, Pearlie Golden, Ousmane Zongo, Timothy Stansbury Jr., Melvin Lawhorn, Miriam Carey, Sheron Jackson, Tendai Nhekairo, Christopher Kissane, Bo Morrison, Aiyana Jones, Tarika Wilson, Stephon Watts, Atwain White, Orlando Barlow, Aaron Campbell, Victor Steen, Steven Eugene Washington, Alonzo Ashley, Ronald Madison, James Brissette, Justin Sipp, Travaris McGill, Dante Price, Jonathan Ferrell, Amadou Diallo, Mark Clark, Fred Hampton, Trayvon Martin, Jordan Davis, Renisha McBride, Oscar Grant, Jesus Huerta, Yvette Smith, Eric Garner…. too many others.  No, Mike Brown was not an anomaly, just a reminder of the ubiquitous violence against black bodies. 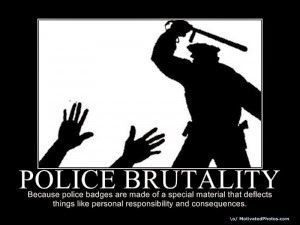