I first fell in love with this story fourteen years ago while on a date with the woman who would two years later birth my son.  I was nineteen, a sophomore at Texas A&MUniversity, only a year removed from my working class hood—experiencing a little bit of black middle class life as a first generation college student at a predominately white institution.
I, like many other black folks, anticipated what this story would depict about black life—love, romances, successes, friendships, faith, hopes, and “respectability”—; therefore, we packed theaters across the country to see the story and later we continued to support it through DVD purchases.
I guess the anticipation was grounded in a need to see a “positive” and nuanced depiction of black life, particularly one that highlighted black success, black opulence, and black love. It was a relief from the grimy tales that captured some of the dark realities of black life, black dysfunction, or those scripts that poked fun at it or totally got it wrong. For the black middle class and those striving to be, this narrative represented pieces of their life or a life that they hoped for. 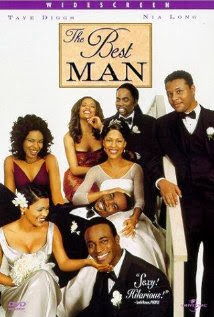 Or maybe this was just my experience?
It was films like The Best Man (1999) that showed me a life that I had no knowledge of, but a life that I was socialized to strive for. It looked much different from whence I came, and I knew, sitting in that theater, that it was a life, at least pieces of it, that I would attain. And though it was not a perfect story, it had a happy ending for black bodies that looked like mine, and that was enough for me.
I found myself trying to figure out which character I was most like (a mix of Harper and Murch) and which woman I would want to be with (a mix of Robin and Jordan). I imagined success in some corporate job that allowed me to have a nice condo or town home and the ability to travel at will. I thought about reunions with my friends and weddings where we would dance to tunes that were popular during our college days.  I even wondered whom I would choose as my best man once the opportunity came for me to be married.
Looking back over the last fourteen years, I can say that I have had the opportunity to experience much of what the film portrayed. I have great friends, I’ve loved, I’ve enjoyed romances, I became a father, I married, I’ve gained a few stamps on my passport, I’ve had a few “successes,” I’ve explored life, and I’ve had the opportunity to help a lot of people.
But like the mother in the Langston Hughes poem, these last fourteen years “ain’t been a crystal stair.”I’ve experienced depression, been suicidal, divorced, experienced “baby mama drama,” failed, effed up, gained some weight, hurt some people, lost jobs, lost everything, given up, and started over. Stuff that I am sure we would have seen our favorite characters experience had the movie become a television series. Why? Because shappens (shit happens), and life, particularly black life, is complicated and messy.
I am glad that the dark and nasty parts of my life have not been projected on a screen for everyone to view as the only representation of me. To do so for my life, your life, or black life in general would be misleading and down right wrong. Yet, I find it equally wrong to only portray the good, beatific, and pretty pictures of my life, your life, or black life because truth be told sometimes (or all the time for many) we sing “This can’t be life, there’s gotta be me more,” or “Shit, Damn, Motherfucker.”
I went back tonight. I went back to the theater to see what life had been like for the characters that I fell in love with years ago.  How had they progressed? What had they overcome? How did they love now? How would grown and sexy be shown for people more mature with more responsibilities and with more life behind them?
This time I was with two friend girls who are also on the PhD track at Rutgers.
This time I had lived some of what I witnessed fourteen years ago.
This time I was a little suspicious of black middle class life.   (See E. Franklin Frazier) 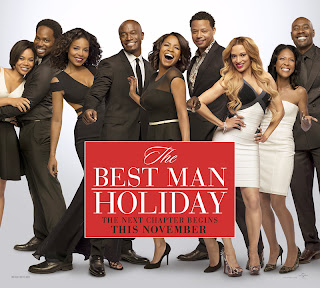 Nevertheless, I was equally excited to see The Best Man Holiday (2013).
Not only because I love a good romantic comedy, especially one that features black people who look like and depict parts of my life and the lives of my friends, but also because I need a little hope and respite.
I needed to see the type of black love that I want; I needed to see the possibility so that I can continue to hope. Because at times I feel unlovable or that the type of love that I want is elusive due to my own pickiness.  Although I have good examples of the type of love that I want in my friends’ relationships and my mentors’, I needed a reminder that someone like me could attain all that love that I saw in the film—beautiful, sexy, fun, tough, and lasting.
But I also feel that, at a subconscious level, I needed respite from the micro and macro aggressions on black life and from the ways in which black life has been reported or portrayed as of late.
In the same week that the movie came out the killer of Renisha McBride was finally arrested, Nelly suggested violence against black women because he still does not get sexism and misogyny, Lily Ally redeployed the objectification of black female bodies in her attempt to critique the music industry,  and Marissa Alexander was denied bail.
And in this past year I’ve witnessed: Trayvon Martin’s killer, George Zimmerman, get off twice for crimes that he committed –one against a black body and the other against his wife, Miley Cyrus attempt to perform what she considers blackness,  Macy’s and Barney’s racially profile blacks, young black men at UCLA call foul on the institution’s lack of diversity, racists and hipsters  don black face for Halloween, Jonathan Ferrell shot down while asking for help, and so much more bullshit that comes with being black in this “white man’s world.”
Hence, my soul needed a rest from everything inside me and outside of me that threatens my existence, that says that I am not worthy, that suggests that I am less than American or less than human, and that does not love me.
I got that in The Best Man Holiday. It was a cathartic experience—I laughed, I had tears that welled up in my eyes that would not come out, I smiled, I was sad at times, and I also reminisced on times with my friends. The two hours in the theater was like a religious experience; through the film I was able to not only hope and get away from the BS for a minute, but also make sense of my existential realities.
Interestingly, the original and the sequel both include a version of Stevie Wonder’s classic As, with the sequel featuring a rendition sung by Marsha Ambrosius and Anthony Hamilton.  In the original it serves as the background track for Jordan and Harper’s days of yore in undergrad when their friendship crossed the line.  Maybe it was away of showing the audience that their friendship and attraction to each other would last always. (SPOILER ALERT) In the sequel it was used to eulogize Mia and encapsulate the thoughts and feelings of her loved ones in the wake of her untimely passing.
But in hearing the song this time I was reminded of the power of black love (in a romantic sense and love for black people in general), the hope of love, the love that I feel from friends and family, and Gods enduring love. I left the theater full of joy; my soul was no longer weary because I had been filled with hope.
« Melissa Harris-Perry And bell hooks Discuss Black Womanhood, Politics And Media (VIDEO)
The split in higher education teaching »